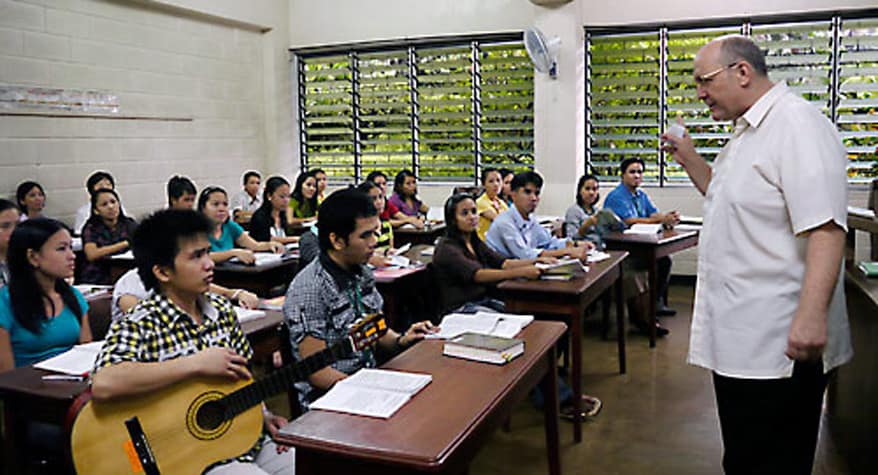 God has blessed Fr. James Kroeger with good health through his 43 years as a Maryknoll missionary in the Philippines, but the Greenville native admits to one illness.

“It is an allergy. I am allergic to people who don’t smile,” Fr. Kroeger told The Compass during a recent email interview from his home in Manila. “Joy attracts. Joy is infectious. True joy evangelizes.”

Fr. Kroeger said God showed mercy and spared his life through a series of natural disasters ranging from storms to volcanoes, which struck the Philippines over the past four decades, most recently when Typhoon Haiyan, known to locals as Typhoon Yolanda, struck Nov. 6, killing more than 6,000.

“Filipinos have a great resiliency. They band together and share whatever resources are available,” Fr. Kroeger said, noting the Manila area largely escaped the wrath of Typhoon Haiyan, which centered its fury 200 miles south of the capital city and second largest city in the Philippines.

A member of New York-based Maryknoll, the Catholic Foreign Mission Society of America, Fr. Kroeger has used the resources of the Catholic Church to focus on the education and formation of Filipino priests, sisters, catechists and laity.

Fr. Kroeger has served in numerous academic and administrative positions with Maryknoll and is currently executive secretary of the Asian Missionary Societies of Apostolic Life. He is also president of the Philippine Association of Catholic Missiologists.

The third of four children born to Floyd and Dorothy Kroeger, German farmers in the Hortonville area, Fr. Kroeger said he first felt his priestly vocation while a student at St. Mary School in Greenville.

“Probably the greatest influence was our pastor, Fr. Norbert Vande Loo. I always remember him at prayer at his kneeler as he prepared for the Eucharist. He had a real heart for the ordinary farmers in the community,” Fr. Kroger said.

A sense of mission formed in Fr. Kroeger while attending high school at Sacred Heart Seminary in Oneida in the early 1960s.

“The rector, Msgr. Orville Griese, instilled in us a strong sense of mission consciousness,” Fr. Kroger said. “He promoted a mission club that made and sold rosaries and leather goods to raise money for the missions.”

On the way to college graduation from St. Paul Seminary in St. Paul, Minn., Fr. Kroger said “an inner voice kept prompting me to explore a missionary vocation.”

The final step toward his missionary vocation came when Fr. Kroeger, an avid reader of Maryknoll magazine, applied for and was accepted by Maryknoll with the blessing of then-Green Bay Bishop Stanislaus V. Bona.

Assigned by Maryknoll as a seminarian in the Philippines in 1970, Fr. Kroeger was ordained a priest in 1975 and continued his missionary work in the Philippines, save for a three-year period in Rome to earn licentiate and doctoral degrees in missiology.

“I had expressed a preference for the Philippines because I knew the Maryknollers worked with farmers in Mindanao. I thought with my farming background I could be a good missionary priest for the rural folks,” Fr. Kroeger said.

But after two years of parish work, Fr. Kroeger was asked to teach theology at a seminary in Davao, a city within Mindanao, where 80 percent of the population is Roman Catholic.

“To understand the church here in Asia one must realize there are 4.3 billion Asians, fully 60 percent of all humanity,” Fr. Kroeger said. “Of this vast multitude of people, less than three percent are Christian. It’s correct to say more than 4 billion Asians are followers of other living faiths like Islam, Hinduism and Buddhism. These startling statistics define the missionary task of the church in Asia.”

Fr. Kroeger served as theology professor, dean of studies and library director at the Davao seminary before being sent to Rome.

Since returning from Rome he remains involved in theological education and formation and, during the 1980s and 1990s, taught every other summer at the Holy Spirit Major Seminary in Dhaka, Bangladesh.

A member of the pre-Vatican II generation that sang Gregorian chants as seminarians and took years of Latin, Fr. Kroeger is a fan of Vatican II reform and he “rejoiced with the spirit of renewal engendered by soon-to-be-saint Pope John XXIII.

“The more I study, research write and teach about the Second Vatican Council, I become totally convinced Vatican II was the Lord’s special gift to the whole church,” said Fr. Kroeger, the author of three books on the historic council.

Fr. Kroeger said he feels Pope Francis is giving new life and vigor to the fruit of Vatican II that renewed the fundamental missionary character of the church. He said when Jesus spoke of conditions to be his disciple “he said, according to Luke, that one must renounce himself and ‘take up his cross every day and follow me.'”

“Undoubtedly, as John Paul II noted, mission involves ‘an emptying of self which is permeated by love and expresses love,'” he said. “Mission follows this same path and leads to the foot of the cross.”

That means the missionary will face challenges, such as language barriers and differences in life values, but while a form of the cross, “they are certainly bearable considering the importance of the overall mission,” Fr. Kroeger said.

While Fr. Kroeger has spent his priestly years in the Philippines, three Filipino priests are currently in the Green Bay Diocese, including Fr. Ricardo Basquinez, associate pastor at St. Mary Parish in Greenville.

“I have never met Fr. Kroeger, but my coming here and he over in the Philippines offers an exchange of cultures and ideas for our church that I will share when I return to the Philippines,” Fr. Basquinez said.

Now 68, Fr. Kroeger, who tries to return for visits to Greenville on an annual basis, said he has no plans to retire.

“I am still blessed with good health at 68. I thoroughly enjoy my teaching and formation work. As long as possible I hope to make whatever contribution is possible,” Fr. Kroeger said. “I pray God will give me the wisdom and courage to accept when the time has come to let go. Whenever that time comes I will have had a marvelously fulfilling life as a Maryknoll foreign missionary.

“Who can ask for any greater blessing? All I can say repeatedly is Deo Gratias (Thanks be to God),” he added.