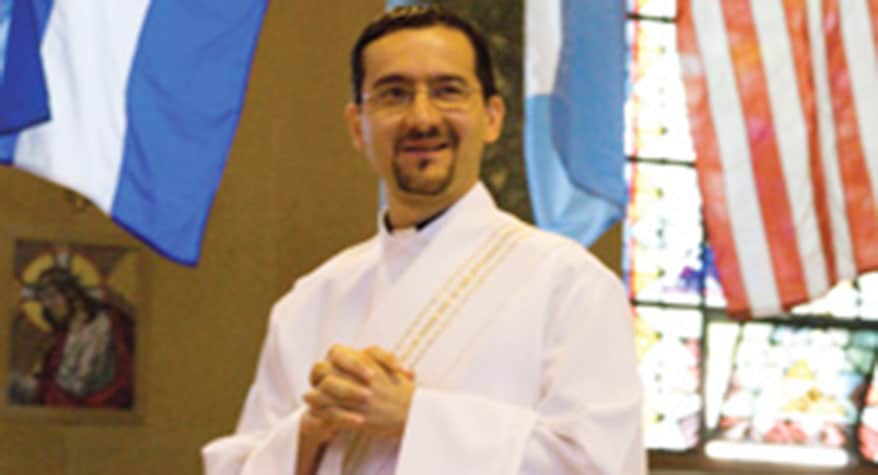 The U.S. Hispanic population is over 48 million strong  making people of Hispanic origin the nation’s largest ethnic or race minority. Hispanics constitute 16 percent of the nation’s total population, not including the 3.9 million residents of Puerto Rico.  Hispanic youth are the fastest growing segment of the population and Hispanic Catholics are the fastest growing segment of the U.S. Catholic Church. The Maryknoll Fathers and Brothers are pleased to celebrates Hispanic Heritage month with a story about our latest priest, Guatemala-born Rodrigo Ulloa-Chavarry. 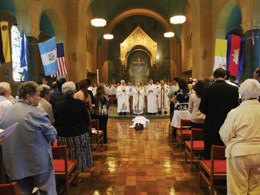 The excitement on their faces lit up the chapel on that sunny morning. Coming from many cities in the United States, Central America and Europe, family and friends gathered on June 4, 2011, at Maryknoll’s headquarters in Ossining, N.Y., to witness the ordination of Rodrigo Ulloa-Chavarry as a Maryknoll priest.

Ulloa-Chavarry, 30, heard his vocation call while working for the U.S. Air Force in Abu Dhabi, United Arab Emirates, where he was sent right after the Sept. 11, 2001, terrorist attacks on the United States.

When he returned to the States, Ulloa-Chavarry visited his family to spend some quality time with them. Intentionally, he left his diary in his bedroom. When he was back on the Air Force base, he told his mother to look for the diary. He had written a message for her. As she went through her son’s handwritten pages, Sandra Ulloa started weeping. In the diary Rodrigo explained how Air Force chaplain Father David Czartorynski had helped him reconnect with the Church. Rodrigo voiced his interest in religious life.

“My hands were trembling as I was reading it. I didn’t want him to be a priest. I was scared. I felt like they were taking my son away from me,” Sandra says. But time builds bridges and gave Sandra the chance to speak to priests and learn about their life. The day of the ordination her feelings were different from when she found out about her son’s vocation. “Now I give thanks to God for helping Rodrigo to choose this path,” his mother said. “I think he’s going to be a great priest and a great missioner.” As Rodrigo was ordained, she proudly stood by him with Rodrigo’s father, Marco Antonio Ulloa, brother Arnoldo and sister Mariana.

Rodrigo Ulloa-Chavarry was born in Guatemala. He went to Catholic school, played street soccer and dreamed of traveling. His father had studied with the Marist Brothers, but left before taking vows. His paternal grandmother attended weekly Mass celebrated by Archbishop Oscar Romero in El Salvador. “She was a good friend of his,” says Rodrigo’s father.

After emigrating to the United States in 1999, 18-year-old Rodrigo Ulloa-Chavarry enlisted in the U.S. Air Force, where he worked for the Department of Transportation. He also earned a bachelor’s degree in computer science at the National American University. Pursuing diocesan priesthood, Ulloa-Chavarry entered Immaculate Heart of Mary Seminary in Winona, Minn. While visiting friends in Indiana, he happened to attend a Mass at which Maryknoll Father Peter Chabot was speaking about Maryknoll and mission. The rest is history. After consideration, Ulloa-Chavarry requested his file to be transferred to Maryknoll, and that is how his missionary training started. 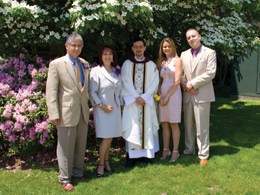 Cardinal Theodore McCarrick, archbishop emeritus of Washington, D.C., presided at Ulloa-Chavarry’s ordination Mass. In his homily the cardinal spoke about Maryknoll’s centennial this year and the importance of mission for the future of the Church.

“Rodrigo is our centennial priest. We are honored to have him, because a centennial is not an end; it’s a beginning,” Cardinal McCarrick told the congregation. “Rodrigo,” he said, “Maryknoll is waiting for you, the world has been waiting for you. Church and missions, especially in Nepal [Ulloa-Chavarry’s new mission site], are waiting for you… The Church cannot live in the past; it has to live in the future. That’s why we are called to mission.”

Ulloa-Chavarry says becoming a priest is the highlight of his life. “I honestly believe that your identity starts to change, but your personality remains the same,” he says. “You don’t become a priest in the hour of your ordination; it’s a process. To me, being used by God as a mediator among the people is something very sacred.”

The newly ordained priest started his Maryknoll preparation in 2003. After four years of study, he traveled to Phnom Penh, Cambodia, for his Overseas Training Program from 2007 to 2009. While learning the local language, he worked with children affected by hiv/aids coaching their soccer team and teaching them music. “It was wonderful the rapport he had with the children. He made them feel so important and special,” says Maryknoll Sister Regina Pellicore, who saw Ulloa-Chavarry in action during her own 15-year mission in Cambodia.

In Cambodia, sports were a big deal, says Father Kevin Conroy, a Maryknoll priest associate who served with Ulloa-Chavarry in that Asian country. Conroy recalls a particular soccer match in which referee Ulloa-Chavarry pulled a red card expelling Conroy from the game for a minor offense. “I deserved it,” Conroy says, laughing. “We developed a friendship.” That’s why he says he came halfway around the world for this ordination. “It was a real joy when he (Ulloa-Chavarry) came and we had some good talks about mission ministry,” says Conroy, referring to Ulloa-Chavarry’s two years in Cambodia.

Ulloa-Chavarry will find his next home in Nepal. There he will join Maryknoll Father Joseph Thaler and the small Christian community that represents 0.5 percent of the predominantly Hindu country’s population. Humility, prayer and creativity will be the young missioner’s resources. “I truly appreciate Maryknoll’s longstanding ministry,” he says. “There’s so much wisdom among the missioners. I’m trying to absorb as much as I can like a sponge so I can pass that knowledge to generations to come.”

For more information about becoming a Maryknoll Father or Brother visit www.maryknollvocation.org