History Of The Maryknoll Society Center And Seminary Building

The largest fieldstone building in the country stands on Ossining’s Sunset Hill.

The first home for the Maryknoll Fathers and Brothers was established during 1912 in an old house located in Hawthorne, New York, about 15 miles north of Manhattan in the then semi-rural area of Westchester County. A class of six men had been accepted to enter the new seminary during September 1912, but even before they arrived the house was deemed too small to accommodate them.

Maryknoll’s co-founders, Father James Anthony Walsh and Father Thomas Frederick Price, realized they needed to find another home in Westchester County for their students. A contract soon was signed with a landowner (only known as Mr. Oussani) to purchase a 53-acre property adjoining an estate owned by John D. Rockefeller in Pocantico Hills. However, Rockefeller did not want this new Catholic Society as a neighbor. He sent an agent to raise the offer by $15,000, and Mr. Oussani decided to sell the land to the new bidder.

In hindsight, this setback proved to be a blessing. The Society sued and eventually received an $8,000 out of court settlement. The lessons learned from this first attempt to find a permanent home helped them better manage the next attempt.

The Society located a 93-acre property in Ossining owned by a Mr. Law that included three houses and a barn. In an attempt to sidestep anti-Catholic bias, Father Walsh sent Miss Molly Rogers (later Mother Mary Joseph Rogers, founder of the Maryknoll Sisters) to handle the purchase. Presented as a “Lady from Boston” and accompanied by a lawyer, Rogers negotiated the sale. Father Walsh, dressed as her chauffer, waited for two hours with the car.

The successful ruse resulted in the purchase of Sunset Hill for $44,500, a lower price than what had been offered for the Oussani property.

From the topography of their new home, as well as Father Price’s devotion to the Blessed Mother, the Society became known by the name of Maryknoll. 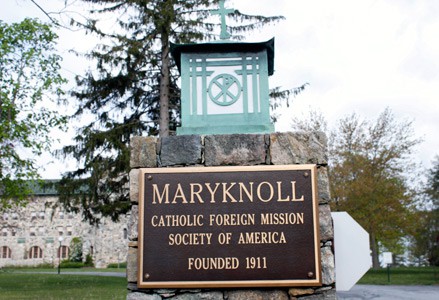 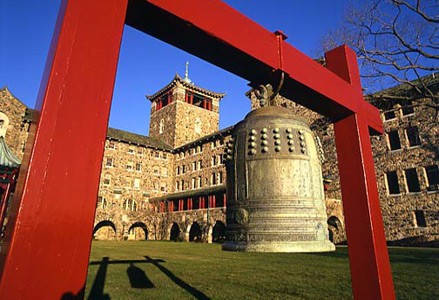 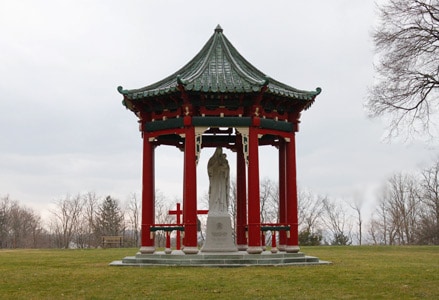 Maryknoll occupied the property for less than a decade when it realized that its membership and seminarians had outgrown all the original buildings.

A larger facility was required and the Boston architectural firm of Maginnis and Walsh (Timothy Walsh was the brother of Father Walsh) was commissioned to design the Seminary Building that today dominates the grounds. The Society’s vision for the 210,000 square-foot H-shaped building included a dining hall, kitchen, archives, crypt, chapel, museum, offices, classrooms and conference rooms, library and accommodation for 300 that included faculty, students, Maryknoll Brothers and guests.

This immense and expensive project took almost three decades to complete, sometimes forging ahead but often stopping during the depression, World War II and the Korean War. Throughout the years, Maryknoll had to balance financing for its overseas missioners and other building projects throughout the U.S. as it managed the ebb and flow of donations. The Society slogan became: “Go slowly on building, economize until it hurts, reduce the debt, and pray hard for more benefactors.”

The first stone in the concrete footing was laid a few weeks after the June 29, 1920 groundbreaking. All the stones, including boulders retrieved during excavation, came from the property and were laid by local Italian stone masons. These stones were said to “symbolize ruggedness, strength and durability – qualities which must mark the right kind of missioner.”

Not until February 16, 1953 did general contractors begin construction of the chapel. Finally, on May 8, 1956, Our Lady Queen of Apostles Chapel was blessed by New York’s Francis Cardinal Spellman. In the crypt below the chapel were placed the tombs of Maryknoll’s mission visionaries — Father James A. Walsh and Father Thomas F. Price.