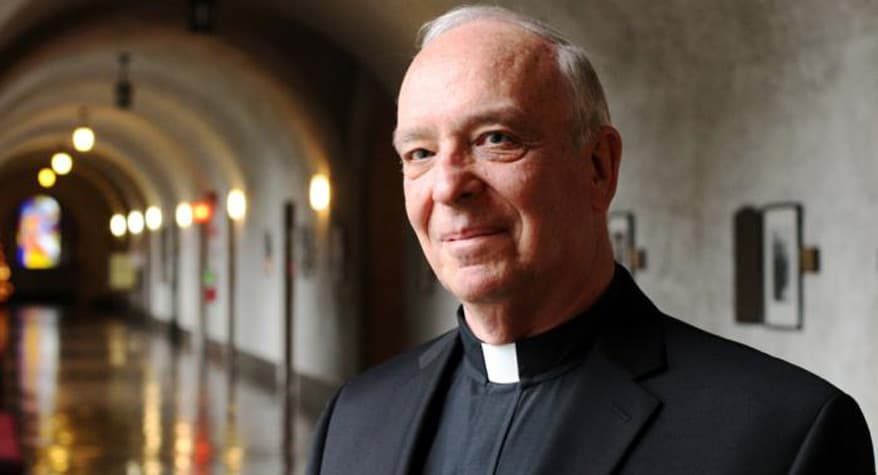 For Father Raymond J. Finch, the new superior general of Maryknoll, “nothing is more rewarding than to go out and help people deepen their faith.”

“If you don’t share the faith, it stops growing. The more you give of it, the more there is. The less you give, it shrinks,” he added.

For Catholics, mission today is more of an everyday experience and less of an exotic concept than it was in the past, Father Finch said. “The world is much smaller and people come and go. You won’t find many young people who haven’t left the country.”

There are also more people from the United States working in mission than ever before, Father Finch said. “Mission is so much bigger than Maryknoll. We have a role and a contribution, but the whole church is in mission.”

Pope Francis talks about people becoming missionary disciples and that’s what Maryknoll is trying to promote, Father Finch said. “He said we have to go beyond our needs to share with one another, deepen our own faith and be transformed by God’s grace.”

“He speaks of the joy of mission and becoming who we are called to be,” Father Finch said.

In Maryknoll’s early years, the United States was considered a mission-sending country and the overseas locations were mission-receivers. But Father Finch said the Second Vatican Council helped Catholics appreciate “a growing awareness of the mutuality of mission.”

Missioner priests, brothers and sisters have been joined by significant numbers of laypeople and parish groups, he said. Laity serve Maryknoll through both a long-established lay mission program, Maryknoll Lay Missioners, and a newer initiative that welcomes volunteers for stretches of six weeks to 12 months.

A group of five people joined the ranks of Maryknoll Lay Missioners Dec. 1 after a 10-week orientation period. They will leave in January 2015 to serve in El Salvador, Kenya, Tanzania and Cambodia for at least three and a half years.

Maryknoll Lay Missioners came out of the umbrella and tradition of the Maryknoll Fathers and Brothers, but it functions independently.

“We help people motivated by the Gospel find situations, adapt to them and use their talents in culturally appropriate ways,” Father Finch said. Lay involvement in Maryknoll has always been strong, but has grown as more laypeople take responsibility for parishes and their faith lives, he said.

Individual lay volunteers in short-term assignments work alongside Maryknoll mentors in Asia, Africa and Latin America. Groups from parishes and universities experience Maryknoll through immersion trips. Father Finch said the experience is more valuable to the participants than the Maryknoll hosts, but is a blessing for the church in the United States. “There’s something privileged about being able to live the faith and share it with another culture on a deep level,” he said.

“Mission isn’t just for professional missioners. It’s for everybody. You were called by God in Baptism to be a messenger of God’s presence in the world,” Father Michael J. Snyder told CNS. He is the coordinator of Maryknoll’s program for short-term volunteers, which was formalized in 2004.

Volunteers do not accomplish physical tasks, such as digging latrines, but develop a camaraderie with the people they encounter overseas and come to appreciate the richness of the world, he said. “It helps us realize we’re all brothers and sisters in God’s family.”

Father Finch, 66, entered Maryknoll in 1966 and was ordained a priest in 1976. He served in Bolivia and Peru for 38 years and was superior general from 1996 to 2002. Although he was elected by a majority of his Maryknoll confreres, the Brooklyn native attributes his return to the leadership post to God’s sense of humor.

He was very happy in Latin America but said, “One of the things very important in mission is to listen to what I am being called to do and try not to say no.”

Father Finch said he will try to do better in his second term. One of the biggest challenges is “we are fewer and we are older. At the same time, I see people still giving and doing what they can to bring the Gospel and God’s love,” he said. There are 350 Maryknoll priests and brothers, a decline from 400 in 2011.

“We do what we can,” he said, quoting Maryknoll co-founder Father James A. Walsh. “Our job still is to go where we are needed but not wanted and stay until we are wanted but not needed.”

“Numbers are not the point. Maryknoll is about giving things over to the local church, forming the local clergy and the local people. Today, we call all people to mission,” Father Finch said.

There are 12 men in formation now to become Maryknoll priests. Three are former Maryknoll volunteers. “We are constantly inviting and reaching out,” Father Finch said. “I would love to see Maryknoll be a reflection of the Catholic Church in the US, with more Spanish-speaking missioners.”

He said in the past three years, Maryknoll has enhanced its program for mission education in U.S. parishes and schools and reached out to deacons. “We don’t think we can do it alone. Mission is from everywhere to everywhere.”

Maryknoll does not recruit from the countries where it serves, but welcomes local clergy called to work in mission in other countries, Father Finch said. There are Korean priests serving with Maryknoll in Cambodia and at least one from Hong Kong working in Africa. “The bottom line is mission,” he said.

“We’re trying to be more faithful each year to what we’re being called to do, here and around the world. There’s always room for improvement,” he said with a smile.