Bishop opens Cause for declaring Wilmington native a saint 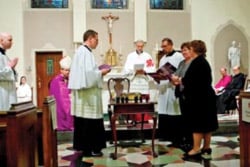