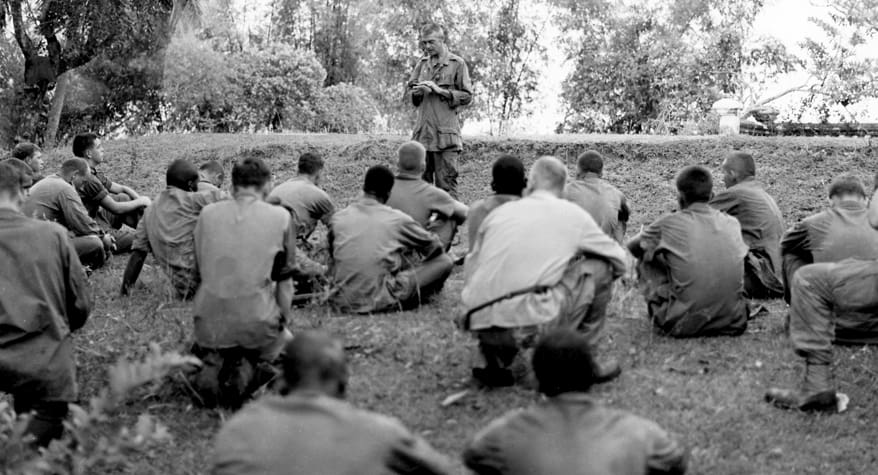 STATEN ISLAND. N.Y. – There are some people who possess an extraordinary singleness of purpose uninhibited by adversity or misfortune of any kind. They have a faith that is so dominating as to provide the will to resist them being deterred from what they see as their mission in life.

Such a person was Vincent Robert Capodanno.

On Sept. 4, 1967, nearly 45 years ago, Father Capodanno was killed on a battlefield in Vietnam living out his purpose in this life — protecting, comforting and indeed, living as one of them, the United States Marines, in battle and under fire.

He risked his life a hundred times over in fulfilling his mission for God on this Earth and did so with courage and dignity and passion.

Vincent Capodanno was born on Feb. 13, 1929, in Mariners Harbor, to an Italian-American family, both his parents having emigrated from the town of Gaeta in Italy. It was here on Staten Island that the remarkable story of one exceptional human being began.

An early calling was his blessing and though he never expressed it to his family, it became evident to them particularly as they watched Vince’s development as a priest and a missionary.

Vince graduated from PS 44 in January 1943. Always fastidious, his classmates voted him best looking and best dresser. He attended Curtis High School, where he served as a class officer and worked after school at a local drug store. A devout Catholic, he attended daily mass while working as a clerk at the Pearl Insurance Company on Maiden Lane in Manhattan, following graduation in 1947.

He also attended night classes at Fordham University. It was during a retreat young Capodanno attended that he confided to his friend William Richter his great desire to become a priest.

He was further drawn to foreign mission work and applied to the seminary of the Maryknoll Missions in Ossining, N.Y. He would spend the next nine years in study and preparation for his calling.

Father Capodanno was ordained on June 14, 1958, with his whole family in attendance. He received ordination from Cardinal Francis Spellman, who would also be his superior in the Chaplain Corps and would later say the funeral Mass for the chaplain.

The first assignment for the new priest was in Taiwan, where he served for six years. Sadly, his mother, Rachel, was in failing health at the time of his departure for the East, making the separation all the more painful for both of them. On Feb. 27, 1961, she passed away and Father Vincent was not able to return home for her funeral.

He was further troubled by the knowledge that his mother had worried about his serving so far away and in a foreign country.

Reassigned to Hong Kong in 1965, it was at this time that Father Vincent made an application to join the Chaplain Corps. His restlessness and the desire to do more prompted his decision. Furthermore, he chose the Marines. It was his desire to “go where he was needed.”

After serving 11 months in Vietnam, he insisted upon extending his tour by six more months. His work of living with and sharing the burdens of the combat Marines was not yet completed. His request was ultimately granted in the summer of 1967.

The decisions — to become a priest, to enter the missions, to serve as a combat chaplain — were great ones, yet seemed to flow from Father Vincent as the natural course of his life and purpose took shape within him. He, indeed, became a Marine. He lived with them, worked with them, comforted them under dire stress and in the end, died with them.

On Sunday, Sept. 3, 1967, Father Vincent celebrated his last Mass in the village of An Hoa, south of Da Nang. A corporal who was an altar server that morning remembered the sky as a beautiful blue, and the sun bright.

The next morning, Operation Swift began. A standard “search-and-destroy” mission turned into a sky lit up with enemy mortar fire. Father Vincent arrived on the scene with companies K and M.

As the fighting intensified through the morning hours, Father Vincent was seen running from one fallen Marine to another, comforting and attending the wounded, administering the last rites of the church to the dying.

He felt the pain and suffering of “his Marines,” the men he called his parishioners. With no regard for his own welfare, he continued to perform what he considered his duty.

Out-numbered as they were, the 5th Marines suffered many casualties. Father Vincent was hit during one of his forays — shrapnel wounds to his arms, hand and leg — but refused medical attention. He instructed the corpsman to attend to the other wounded first.

As the battle persisted into the early evening, a enemy soldier with a machine gun had two Marines pinned down and Father Vincent went to their aid.

One of them, Cpl. Tancke, said: “He actually jumped in front of the machine gun.” Two bursts of fire hit the chaplain. He received 27 bullet wounds as he and corpsman Leal were killed together. One of the Marines who retrieved the chaplain’s body reported that he lay with his right hand over his left breast pocket and “had a smile on his face.”

Father Capodanno’s life is revealed in honor and intensity by Father Daniel L. Mode in his biography, “The Grunt Padre.”

Memorials to The Grunt Padre abound. At least seven chapels have been dedicated to his memory. On Dec. 29, 1971, the Navy named the Escort Ship DE-1093 the USS Capodanno; among the art work inspired by Father Capodanno is the oil painting by Staten Island artist Gregory Perillo as part of his 40 works dedicated to the warriors of Vietnam.

Of course, Seaside Boulevard was renamed Father Capodanno Boulevard. The list is far to long for this space.

Although he did not pursue such honors, Father Capodanno was awarded the Vietnamese Cross of Gallantry with Silver Star and the Navy Bronze Cross for meritorious service during six combat operations.

He received the Purple Heart posthumously and on Jan. 7, 1969, at the Washington Navy Yard Sail Loft, James Capodanno, on behalf of the Capodanno family, accepted the Congressional Medal of Honor for his brother.

Most significant are the steps being taken by the Vatican in Rome to bestow sainthood in the Roman Catholic Church upon this man.

There are three stages to the process and Father Capodanno has achieved stage one — named a “Servant of God.” Earlier this year, a Vatican representative visited the Island to interview those who knew him as part of the investigation for stage two.

Whether or not the canonization is accomplished, Father Capodanno is surely no less than a saint to all who knew him. It was said by those who served with him in battle that he was a man “imbued with the spirit of Christ …”

Said Navy Chaplain Joseph F. Cloonan, serving in Vietnam, in a statement published under the title “A Bell For Capodanno”:

“But every once in a while, like a flash of heat lightning, the self-giving of someone like Father Capodanno illuminates the mystery of nobility in an ignoble world.”

Another colleague, Father Thomas J. Woolten, wrote of the Marines and Father Vincent after his death: “Those Grunts saw Christ when they saw Vince.”

He could not have been far off the mark.