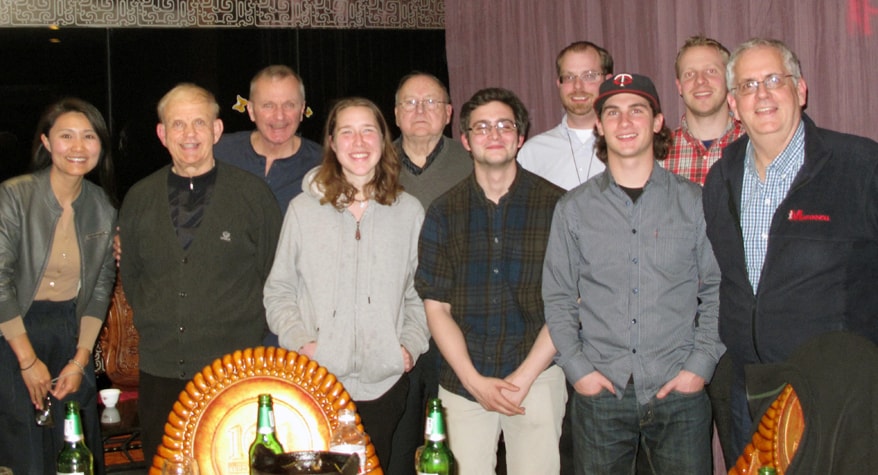 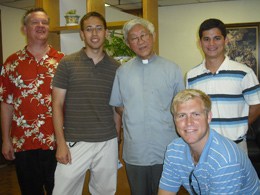 This past summer (2009), Victor Ingalls ’12 (Mobile), Colin Wen ’13 (Sacramento), and I had the unique opportunity to spend six weeks in China – working with Catholic missionaries and learning about the culture, the people, and the relationship between them and the Catholic Church. We were hosted by Maryknoll priest Brian Barrons. He had planned for us to help him teach English at the Medical College in Jilin, a city in north-eastern China. However, due to the H1N1 flu pandemic, the Medical College cancelled our teaching assignments a week before we were to arrive. Though unsure as to exactly how our time would be restructured, he expressed trust in divine providence and invited us to make an act of trust. As Father Barrons put it, “We will trust in God and see what happens.”

When we met Father Barrons in Beijing, we discovered that we would go to Hong Kong for four weeks, where we could operate more freely, and then head up to Jilin for the remainder of the time. In Hong Kong, we stayed at the Maryknoll retreat house in Stanley. There we learned from other Maryknoll priests and missionaries about the history and hopes of the Church in China. The experience of the Church in China is quite different from our own, and this period of study helped orient our trip.  After the communist revolution in China the Catholic Church was banned due to its allegiance to a foreign authority, and was replaced by the “Chinese Catholic Patriotic Association.” Some Catholics chose to go underground rather than to join the nationalized association. The patriotic community is supported by the Chinese government and has a complicated relationship with the Vatican. The underground community has more allegiance tot he Vatican but is more oppressed by the government.  This is a focus of continued dialogue to try and unify the two bodies. 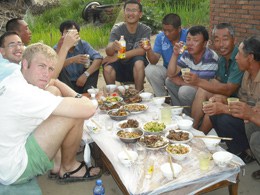 Father Bob Asterino, co-founder of the Union of Catholic Asian News, explained the difficulties and dangers of gathering and distributing the news on the Church in China, as well as possible solutions for unification within the Chinese Church. Father Mike Sloboda introduced us to the Diocese of Hong Kong’s Holy Spirit Center whose mission is to study and store data about China’s ever-changing mainland to aid in the implementation of appropriate Christian responses. During our visit, Father Sloboda introduced us to Bishop Tong of Hong Kong, who spoke with us regarding the Church in China and later, even though he just celebrated his seventieth birthday, taught us a lesson in humility on the basketball court! Afterwards, Father Sloboda took us to the cathedral where he introduced us to Cardinal Zen, bishop emeritus of Hong Kong. His Eminence spent fifty minutes with us, speaking very frankly about the problems in China and his hopes for the future.

Our last two weeks in Hong Kong were spent teaching English to a group of exchange students from China’s mainland. As nearly all of the students were non-Christians, our teaching also served as an opportunity for evangelization.

For the remainder of our time in China, we ventured north to Jilin, where we spent two weeks living with Chinese Catholic seminarians and visiting many poor villages. To our surprise, the villages had a strong Catholic identity. One village was 95% Catholic and had two hundred people regularly attending 5:30 a.m. daily Mass!

When I first considered going to China, I knew that the Church was oppressed in some ways; I hoped to learn how she operates in such an environment. I now realize how serious the demands of the Gospel are: prayer, openness, hard work, and a deep love for God – expressed by laity and clergy alike. This realization was greatly facilitated by each Maryknoll and Chinese priest I met, who have dedicated their lives to Christ in the hope that one day the underground and patriotic Church will be united. 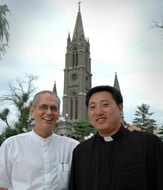 This experience also showed me how great an impact one priest can have.  This was most clearly seen in Father Barrons, who hosts his students for breakfast, lunch, and dinner, has a radio show, and serves as counselor for the school.  Father Barron’s commitment to being a “good shepherd” has borne fruit: he baptized over seventy students this past Easter alone!

The summer was also an experience of God’s amazing Providence.  Had we stayed with our original plan, we would have never been able to meet all the amazing people we did or experience all the opportunities that opened up for us. This summer instilled in us a missionary spirit: to out to places and people in our own dioceses where the Church is not known, welcomed, or wanted and to preach the Good News.

Do you want to be a “good shepherd?” Have you heard the call?