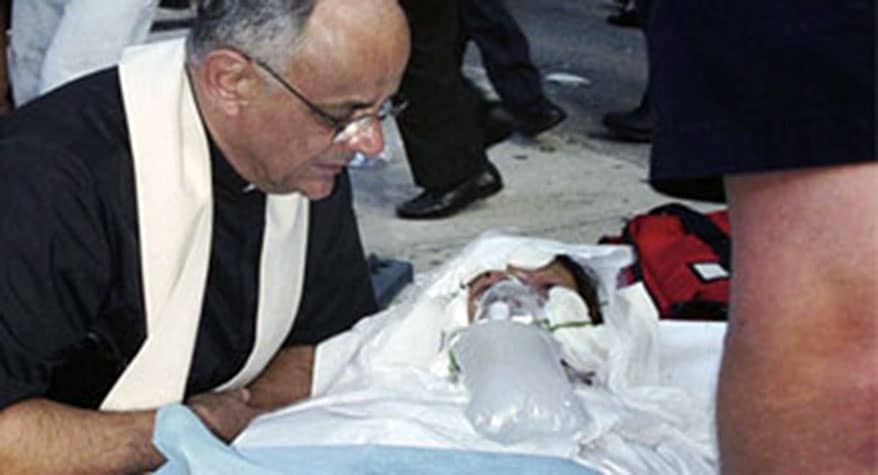 This is a story about the presence of God made so real for me, thousands of other New Yorkers, and for most of the known world on one very memorable day.

That morning, a perfect fall day, cloudless and filled with bright sunshine, I celebrated the eight o’clock Mass in Transfiguration Church in Chinatown, New York City. Our elementary school children were in their second day of the new semester. I planned to cast my vote in the mayoral primary election and enjoy the rest of Tuesday, September 11, 2001.

Stunned by the image of the towering inferno, I was in a daze while collecting the Holy Oils, stole, and prayer book needed to administer the Sacraments. This would not be the first time in 30 years of priesthood that I would walk into a disaster such as this. In 1972 in Hong Kong, I was waist deep in the mud of a landslide that took the lives of 72 people. I learned how important it was to be an instrument of God’s presence and am still humbled by that privilege. I knew that the presence of a priest would be important to both survivors and responders that morning at the World Trade Center.

Then, the television showed a second plane crashing into the South Tower. The cacophony of screams, confusion and horror radiating from the television and the parish staff, and the subsequent roar of people pouring out into the street changed everything. I was not going down to an accident, but into the eye of an attack on the City of New York. How could this happen in New York City?

Running south past the federal court buildings and prison, I was battered by the shoulders and flaying arms of the thousands of people evacuating downtown Manhattan… running and tripping on their way north or east across the Brooklyn Bridge. All of them had the same look of horror on their faces. When and where would the next airplane strike?

One short block from the epicenter of the disaster, the smoke, confusion, falling steel and debris made this area an obstacle course. I did not stop, hesitate or turn but walked into the center of the triage area of those ministering to the burned, bruised and disoriented being taken out of the burning North Tower. The Millennium Hotel staff was in the forefront of this service. God was present in the compassion shown by all those outside the main hotel entrance. These were the people of New York at their best. 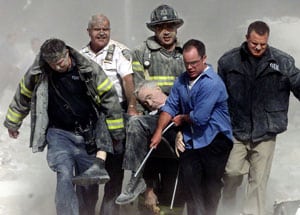 Just as I put my stole around my neck, a woman being escorted out of the building called “Father”. Her arms were seriously burned. “Please, call my daughter and tell her that I am alive” she said. She was the first of several victims who dictated phone numbers to me. There was no phone service. It was much later in the day that I realized that the people who collapsed into my arms before completing their request left me with patches of burnt flesh on my clothing.

One woman was brought out on a stretcher so severely burned that only part of her face was visible through the bandages. Not expecting her to survive, I prayed the Lord’s Prayer with her, as her eyes moved in response. The Word of God became a visible and moving presence for her on that street.

Though we were ministering to the injured from the North Tower, our triage was closest to the South Tower. At 9:50 A.M. a loud, cracking sound came from that tower. It was collapsing. The top 20 floors were tilting toward and falling on top of us while the lower 90 floors were folding like an accordion into the foundation of the building. I was able to run several yards across Fulton Street to clutch the iron fence around St. Paul’s Church yard. Three other persons behind me with the same idea were only able to grasp one of my legs before we were plunged into the darkness of the falling debris. We remained in the dark struggling to breathe and listening to screams for help.

When we saw light again, there was devastation all around us. The emergency vehicles and equipment were destroyed. And like us, everything was covered with a gray-brown ash. We stumbled through the area looking for survivors. A police officer emerged from the rubble in the street. He screamed orders to leave immediately as the North Tower might also come down. I was walking toward Broadway when the North Tower collapsed at 10:28 A.M. The impact was enough for the air pressure at my back to push me several yards out into Broadway. This police officer saved my life. 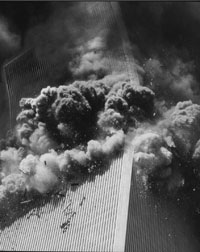 The horror of what was happening didn’t allow me to think about myself or realize that I was covered with ash and dripping blood from my nose. Ambulances stopped and offered to take me to the hospital but I refused, believing that there were many more seriously injured who needed an ambulance. It was only later that I learned there were few or no survivors of the collapsed buildings.

I slowly made my way back to Chinatown amidst the confusion. Passing the famous broad stone steps of the Federal and County Courthouses in Foley Square, I was recognized by court officers who attend the noon Mass at Transfiguration Church. They ran up the steps and returned with a water cooler tank and poured the water over me to remove the mysterious ash material. The grey-brown matter did not move, but became a concrete-like crust that covered me from head to toe.

These court officers and the police officer who screamed us off the triage site were instruments of God’s grace. More and more people, both uniformed and not uniformed, began to appear to help those in need in this still very chaotic and confusing situation. They were focused on the needs of others.

Back in Chinatown and walking up the hill that is adjacent to Transfiguration Church, I should have been alerted by the looks of horror on the faces of people who were staring at me.

As I turned and entered the main gate of the school, the children were being evacuated north to another school. They had been purposely kept unaware of the happenings of that day. The children screamed in horror when they came face-to- face with me. Some cried and I did the same just seeing them that way. The parish staff reacted in horror to what they saw, though happy that I survived what seemed at that time to be the destruction of most of Southern Manhattan.

I was glad to be home and know that all whom I left at the Church and school that morning were safe. I was now aware that there were those, like our school children, who were just beginning to realize the import of what was happening that day. This was the beginning of a period of days and weeks of people trying to deal with the realization of what had happened to their homes, their neighborhood, their school and their world of New York City. What transpired on that beautiful morning began a change in the life of the people of the City of New York and the nation. 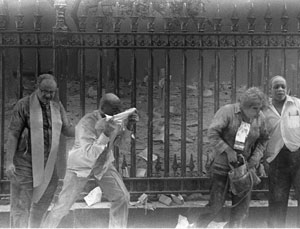 The priesthood of service became so much more important for me and others in the months that followed September 11, 2001. The funerals of firefighters, executives, workers and those we knew brought a somber quality of life to Southern Manhattan. The economy collapsed and the thoughts and future of those of us who live and work there were blurred by the vision of the pile of smoldering debris and the rescue workers, volunteers and visitors from around the world. The heroism shown by New Yorkers and those from around the world was unexpected and unprecedented.

God’s presence was made visible in the Sacraments of the Church, the ministry of the priesthood, and the compassion shown toward the victims by the first responders. It was spontaneous and unexpected as are so many important and meaningful occasions of God’s presence in the face of evil. God’s grace led me down to the World Trade Center that day. The needs of the people and victims were more important than the risk of being there. I did think that I would see God face-toface that morning.

Four months later, in January 2002, the woman who was thought to have little chance of survival from burns at the triage site completed her hospitalization and rehabilitation. When the newspapers celebrated her discharge, she thanked all who helped and prayed for her. Because my photo was featured in that newspaper article, I received many telephone calls from those to whom I had helped that day.

I became engaged in long conversations with those with whom I had only moments of life-threatening and life-giving contact. A young woman on whose burnt feet we had put blue surgical gloves to prevent infection was able to laugh for a long time about walking like a duck into the ambulance. The more poignant phone calls were those I first thought to be crank calls.

People asked me if I had seen their children, their spouses or their parents at the World Trade Center on that day. After four months they still had no sign or proof of their loved one’s fate from that day. They lived with hope that they were still alive or that a trace of something of theirs might be recovered. I spoke at length with these people and can appreciate how the World Trade Center site is so sacred to them.

The recognizable presence of a priest who represents the compassion and forgiveness of God should never be underestimated, especially in the midst of sudden crisis or in the face of such evil. The presence of God and the grace of God was and still is tangible at Ground Zero.

What a gift and privilege it was to be an instrument of God’s grace and part of the team of people from all walks of life who made God so present to all on that day. In our own life journey everyday, we continue to experience God’s presence in these people and this place.

Lord, give me comfort, give me strength, give me hope in the face of sorrow. Give me the knowledge that you are beside me today and every tomorrow. Let me be there for others who reach out to me in their time of need. Let me follow the path you set for me, no matter where it may lead.