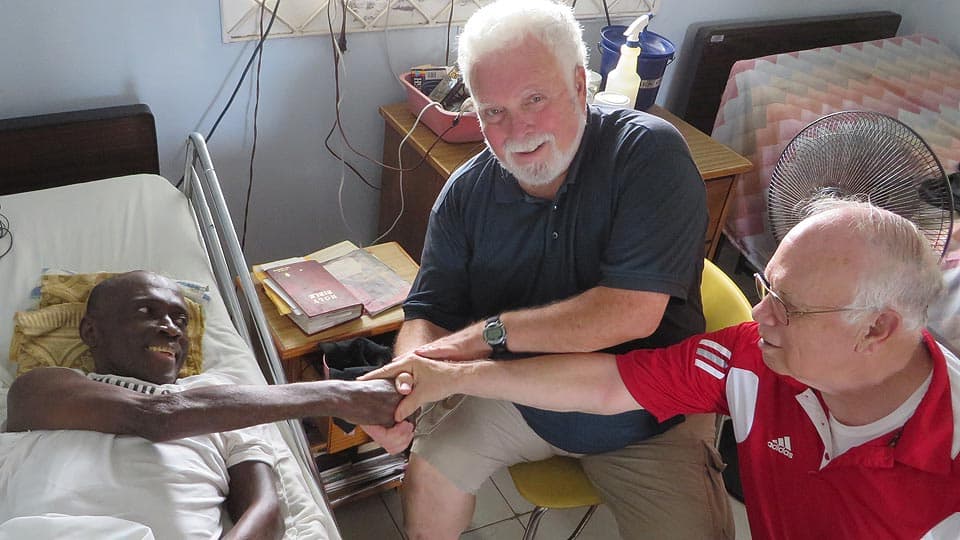 The Maryknoll Fathers and Brothers Mission Education and Promotion program sent 11 pilgrims on a week-long immersion trip to Montego Bay in April, posing the question, “Will you find God in Jamaica?”

I was one of those called to reflect upon and respond to that question, along with Deacon David Alcorta from the Archdiocese of Seattle; Deacon Venancio “Ven” Garcia from the Archdiocese of San Francisco; Deacon Herb Casey and his wife Peggy from Walnut Creek; Rosina Hendrickson, who works for the Diocese of Sacramento; James Cheap and Patt Coyle from Rocklin; Norm Eneim from the Los Angeles area, and Maryknoll mission leaders Kris East from Castro Valley, and Deacon Paul Bork from Buffalo, New York.

In addition to the many opportunities to pray, worship, sing and reflect, we also learned. We were educated on the country’s origins, as well as the history of politics, tourism and Christianity in Jamaica.

Our gracious host, Deacon Baldwin Powell introduced a detailed and ambitious evangelization plan in hopes of increasing the number of Catholics in Jamaica from its current total of 4 percent.

We were treated to amazing stories from extraordinary people.

“Auntie” Delta gave a rousing testimony of her conversion to Catholicism, and how it launched the beginning of St. Paul’s Church. We climbed into the pain of Joe James’ slave-period paintings, and the artist impressed us further with how he defied the odds to hold off the wrath of prostate cancer.

Rita Hilton, displaying incredible energy for someone who has lived three quarters of a century, gushed at the entrepreneurial opportunities in Jamaica, she herself the managing director of a produce company.

But it was the mission aspect of our journey that tugged at our heartstrings and raised questions about our brokenness.

I think for many of us involved in the parish life, there is a tendency to get “caught in the trappings,” as Father Jeff Finley referred to during a Lenten Mission earlier this year. But in the words of Pope Francis, Maryknoll emulates “a church that is bruised, hurting and dirty because it has been out on the streets.”

Our humble group arrived at mid-day on April 29, most of us embarking on our first immersion trip of any kind, and having very little to no clue what to expect.

This much was clear from the outset: God is alive and well in Jamaica.

That was evident during a visit to Blessed Assurance, home to 33 boys and girls with a wide range of physical and mental challenges. It was evident at Jacob’s Ladder, the adult version of Blessed Assurance (both locations are part of the Mustard Seed Communities program that serves more than “500 children, young adults and families”). And it was evident at Hope Hospice, where residents, mostly senior citizens, suffer from an array of illnesses.

Through each person we met and interacted with — including the unsung angels, the caregivers — we not only encountered God, we discovered our own disabilities and vulnerabilities. Far away from the comforts of home, we came away “bruised, hurting and dirty.”

But here is something we didn’t expect, something that caught us off guard: Despite the systematic breakdown of the family in Jamaica, the discouraging numbers among Catholics and the multitudes of dismayed and downtrodden in places like Blessed Assurance, there is no shortage of joy in Jamaica.

“Henri Nouwen, wrote in “The Return of the Prodigal Son,” “There, in the midst of the dreadful emptiness was complete joy. Death no longer was the enemy. Love was victorious.”

It was so refreshing to see the priority that worship has on daily life in Jamaica, even in the “dreadful emptiness.” In every word of praise, in every hymn, joy shone through. It was genuine and contagious.

At the Last Supper, Jesus said to the Apostles, “I have told you this so that my joy might be in you and your joy might be complete.” (John 15:11)

Jamaica may lack many things but His joy is not one of them; there may be many unfinished things about Jamaica, but its joy is complete.

Donald Marquez is a parishioner at Our Lady of the Rosary Church in Union City, and is currently attending Discernment Workshops for the Deacon Formation at the Diocese of Oakland.