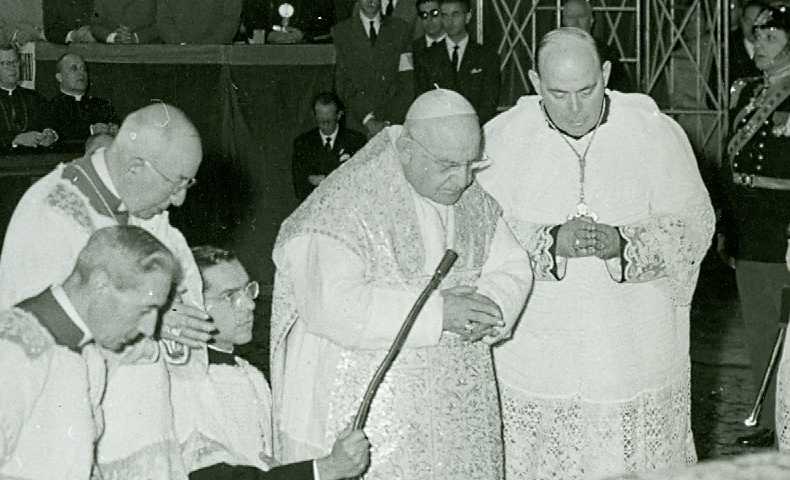 At this time in the history of the Church, the memory of “Good Pope John” has once again surfaced as the Church commemorates the sixtieth anniversary of the opening of the Second Vatican Council (October 11, 1962-2022).  Saint-Pope John Paul II has described John XXIII as “a pastor full of wisdom and Christian hope.”  When he was confronting the difficult journey of the Church in a fragmented, unbelieving world, John XXIII bravely showed “optimistic trust,” disagreeing with those “prophets of doom,” who often forecast disaster and act as though the end of the world were at hand.

Living in Hope.  Pope John was a hopeful realist, an “Advent saint.”  He knew human tragedies first-hand (he lived through two world wars); he experienced the precariousness of world peace (he intervened in the Cuban missile crisis in October 1962 when the world faced a possible nuclear war); he dreamed and worked for world-wide reconciliation, authoring the encyclical Pacem in Terris – Peace on Earth.

Indeed, John XXIII is a modern figure of hope; he trusted the designs of God to guide the Church and all humanity through the vicissitudes of human history.  John XXIII’s hope enabled a new era to unfold in the Church through the action of the Holy Spirit.  The Second Vatican Council ushered in a “new Pentecost” in the global, universal Church.

Venerating a Saint.  Today in Saint Peter’s basilica in Rome one can view the incorrupt body of John XXIII, who died in 1963, in an etched-glass coffin.  Long lines of pilgrims (this author among them) wait to file past the tomb and offer a brief, silent prayer; many bring fresh flowers to leave at John XXIII’s tomb.  Nearly six decades after his death, John XXIII is still remembered fondly for his profound sense of hope and human warmth, for his faith in a humanity renewed in Christ.

Pope Francis asserts that through the event of the Second Vatican Council John XXIII renewed the Church as a “community of hope” within a world full of challenges and difficult problems.  The commitment of the Church to stand in solidarity with all humanity is expressed eloquently in the longest Vatican II document on the Church in the Modern World (Gaudium et Spes).  The poetic opening words capture the Church’s dedication: “The joys and hopes, the griefs and anxieties, of people of today, especially those who are poor or in any way afflicted, these are the joys and hopes, the griefs and anxieties of the followers of Christ” (GS 1).

A Contemporary Model.  Truly “a man sent by God,” Saint John XXIII, the Father of Vatican II, remains a model for all Christians who are called to be “missionaries of hope,” viewing all reality in faith—with God’s vision.  He saw that hope is an essential, pivotal virtue in today’s complex, peace-starved world.  During this season of Advent and always, we Christians boldly affirm: Our God is a God of hope!

O Blessed Virgin Mary, Fountain of Faith Fill me with that same spirit of trust And belief which gave your heart courage To say yes to God’s will for you.

You who brought forth the Word of God,

And gave your Son Jesus to the world,

Help me to surrender as you did

And offer my every word and deed

To the glory of God’s name.

Through the intercession of St. John XXIII May I have the strength and courage To renew the Church in our time.

Help me to read the signs of the ti up mes That, by the grace of the Holy Spirit, I too, like the Blessed Virgin, Might give flesh to the Word in our world.

Drive from my heart, mind and soul

Any thought, fear or fantasy

That detracts from your presence or

Prevents me from following fully

The way of your Gospel in my life.

In Jesus’ Name I pray.