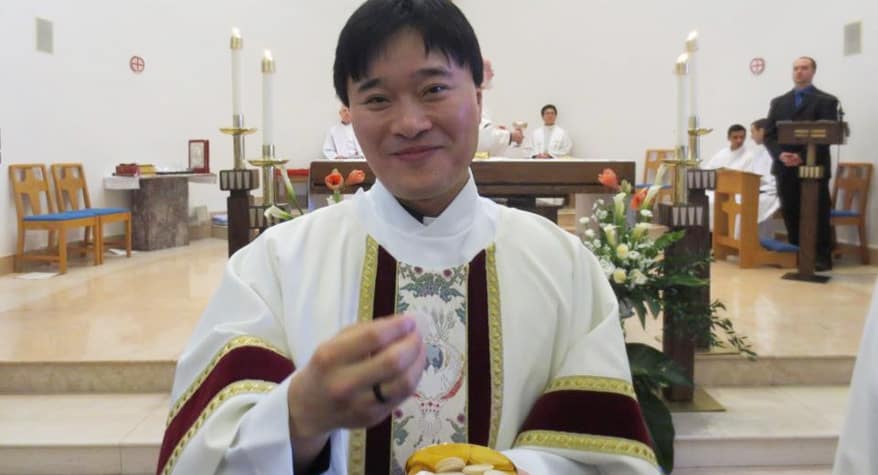 Father Dae Kim (김 대욱) remembers that he was called to the priesthood at, of all the places, a bowling alley in Queens, New York. That is where he definitely decided to join the Maryknoll Fathers and Brothers.

Father Kim was born in Busan, South Korea, as the only child of Kwan Mo Kim and Sang Soon Pak. Though his parents had been baptized into the church, religion was not a component of the family’s structure when Father Kim was a child. The family emigrated to America when he was 10 years old, and his so-called personal “epiphany” occurred during his final year of college.

Fearing that he might fail an important project that would jeopardize graduation, then-student Kim visited the university chapel to sit, think and pray.

“At the time, I was feeling empty and lost,” said Father Kim, who found peace as he continued to visit the chapel and deepen his faith.

He passed the class, graduated and decided it was time that he was baptized into the Catholic Church. After graduation, Kim landed a good-paying job in the corporate world, but again he felt lost since “all I wanted was to make money and enjoy the privileges of rich people.”

Kim decided to volunteer as a teacher’s assistant at the St. Paul Chong Ha-Sang Korean Catholic Church in Flushing, New York. While there, a Maryknoll priest who is a teacher at the church’s Sunday school program and helped prepare Kim for his baptism and confirmation, extended an invitation to a Maryknoll Vocation Discernment retreat. A couple of years later, during a night out for students and teachers at a local bowling alley, Dae Kim announced that he was ready to apply to Maryknoll.

“I have been called to go out and invite all people to eat at the great banquet of our God, especially the most vulnerable – the poor, the oppressed and voiceless,” said Father Kim. “My ordination is my radical response to living out our baptismal call to mission. Being a missioner is to continue the prophetic mission of Jesus.”