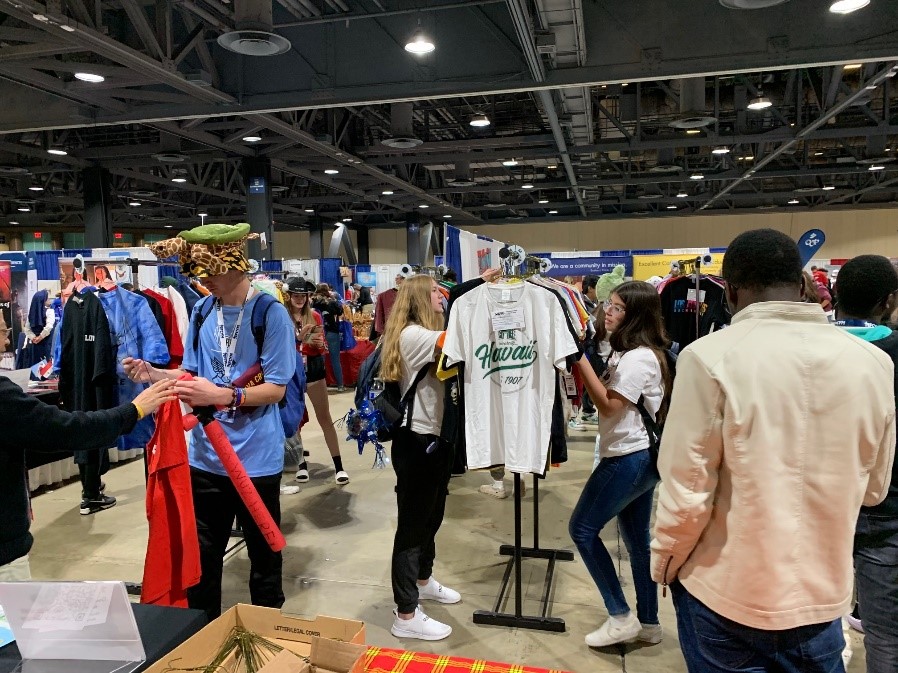 It’s often said that you can tell a lot about people from the clothes they wear.  But, as I was reminded recently in a noisy convention center hall filled with hundreds of Catholic youth, clothes tell us nothing if we do not first open our hearts to the stories of those who wear them.

At the time, our Maryknoll Fathers and Brothers Vocation Ministries team was hosting a t-shirt swap at the National Catholic Youth Conference (NCYC) in Long Beach, California.  The idea was simple – youth were invited to bring a new or used t-shirt they could swap for a shirt that had been donated or brought earlier by someone else.  Shirts would be, ideally, unique – representative of a person’s culture, community, school or church.  Or, the shirt could recall a life event or portray an inspiring phrase.  Most important though was the card pinned to each shirt; completed by the person swapping the shirt, the card told others something about the t-shirt or offered a prayer or encouraging words for the person ultimately choosing it.

The swap took place under the hashtag, “#Share4Creation”.  It seemed like a fun but thought-provoking way of reminding ourselves that, as members of God’s family, we share this one Earth and everything made from it.  Even as shirts were swapped, youth learned how we can care for Creation and impact the lives of people in distant countries through the clothing choices we make.  Youth can also serve as powerful advocates on behalf of those who labor long hours for low pay to produce clothes we often take for granted.  And youth, of course, learned about the extraordinary work of Maryknoll priests, sisters, brothers, lay missioners and affiliates around the world.

The idea was simple.  The experience was, at times, profound.

As youth browsed the racks, some found shirts that attracted them in deep and unexpected ways.  One youth chose a t-shirt donated by a Maryknoll Lay Missioner who served many years in East Africa as a doctor; he told us of his own plans to become a nurse and help those most in need of medical care.  Another picked out a shirt donated by Divine Word Missionaries, she hopes to someday go abroad in mission.  One young man was so excited by the t-shirt he found, he stripped off the shirt he was wearing and handed it to us in exchange.

Perhaps the most inspiring of these stories came from a young woman who decided upon one of the most ordinary-looking of t-shirts – a simple 5K race t-shirt.  A traumatic brain injury years earlier, she recounted, had left her in a coma for about eight weeks.  She regained consciousness on her birthday – her “new birthday”, she remarked – the day she began learning anew how to live and accomplish ordinary tasks most of us perform without thought.  Months of effort passed before she could walk again.  Still, she set an ambitious goal; she would someday run.  On the t-shirt she chose was printed the goal she so painstakingly accomplished; she’s now able to run a 5K race though her running abilities are not as they were before her injury.

It was, however, the hand-written message attached to the shirt that moved her most.  She read it aloud with emotion:  “To whom this shirt will go — may every step you make, make you closer to the heart of Jesus Christ.”

Christ, she remarked, had been with her through it all.  It was in Christ’s love that she found faith in herself to persevere, to run her 5K race, and discover herself even closer to God through the struggle.  She hopes her own hard-won experience will inspire other young people to find faith in themselves, through God’s love, even as they endure the toughest of challenges in their own young lives.

The famed world heavyweight boxing champion, Muhammed Ali once observed, “The fight is won or lost far away from witnesses – behind the lines, in the gym, and out there on the road, long before I dance under those lights.”

This young woman, who shared her story with me, won her race the same way: behind the hospital room curtain, in years of occupational therapy and ultimately out on the path, one painstakingly awkward step at a time until, in a noisy convention center hall, she held up a used 5K race t-shirt and beamed with gratitude.

Vocations - Blog | Winter Newsletter
January 11, 2023
Give Where It's
Most Needed